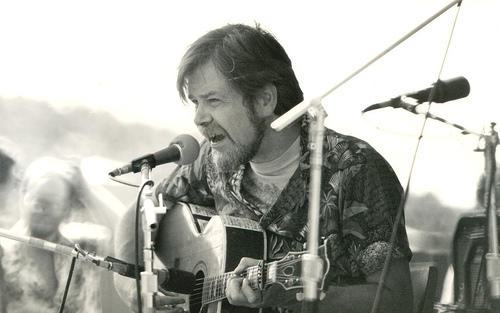 It may have been on my very first outing to a Sunday folk sing in Washington Square, in 1955 or ’56, that I met Dave Van Ronk for the first time. I emerged from the 6th Avenue subway station, blinded by the sunlight and the thrill of anticipation, and walked one block to the east, guitar in hand, ready and eager to join in the singing and playing.

I was approaching the fountain, the main gathering place for pickers, strummers,singers and listeners when I heard a sound unlike any I had ever encounteredbefore. High-pitched, strident, guttural and raucous, it came from a distant pointon the other side of the park. I had to see what this was. A tall, lanky young guy sat alone on a bench hunched over his guitar, a long hank of brown hair cascading over one eye. He was playing and singing “St. James Infirmary” in an uncannily loud voice that echoed off the surrounding buildings. I had heard the song by Josh White, among others, but it had never sounded like this. There was a passion and dedication in this lonely performance that was startlingly different, setting him apart from the more group-oriented jammers that filled the park. I couldn’t help being intrigued and slightly dumbfounded by what I was seeing and hearing.

I got to know Dave in the weeks and months that followed, and for many years wesaw one another around the Village at gigs and at parties. One Sunday early on we walked together across Canal Street to a loft he was sharing with a friend in the shadow of the Manhattan Bridge, where he cooked me an ersatz lunch and regaled me with political theory, musical trivia and un-asked-for advice.*

Van Ronk was a leading presence among the folk music revivalists in the Village.Always fiercely political, he was one of the organizers of the Folksinger’s Guild, a short-lived (and futile) effort to wrangle the performers who were playing in the cafes and “basket houses” (where you were paid more or less what was collected from the audience) into a union. Most of us were without managers or agents, and had no commercial clout. We were making less than a living wage, often playing five sets a night in small, smoke-filled rooms. Before the advent of the proper folk clubs (Gerde’s, The Gaslight, The Bitter End, Cafe Wha?, etc.) some of the venues were no more than converted store-fronts with the folksingers playing conspicuously in the window to attract passersby. Predictably, the free-wheeling,anarchic folkies could not be welded into a unified labor force and it would be years before a proper union for itinerant musicians (Local 1000) would be organized.

Dave was a frequent presence at many of the informal folks sings that took place in apartments and meeting halls around the Village, where eager and aspiring young players showed off their licks and their latest song discoveries. Not many of us were writing our own material back then, so the currency of the day was in finding the coolest, most obscure songs and performing them the best we could for the dozen or two others in attendance. You could hear everything from unaccompanied ballads to intricately-picked blues, sea chanteys. union songs, Carter Family laments and Pete Seeger-inspired calls for justice.

Dave was unique among us. He had a gruff, take-no-prisoners musical attitude, andhis deep knowledge of old jazz tunes by Jelly Roll Morton, Bessie Smith and Ma Rainey, employing their more advanced chord changes, transfixed and educated us.He disdained the word “folk” but he was deeply ensconced in the scene and he dipped deeply into the folk song repertory anyway - along with his blues, ragtime and even Brecht/Weill numbers. Right from the start, his guitar style sounded like no other. His hands were large and he could fret two or even three bass strings with his thumb while contorting his wrist to reach the high notes with his other fingers.(Ten years or so after first meeting him, I transcribed his intricate version of “St.Louis Tickle” for my first book, “Fingerpicking Styles for Guitar.” I don’t know how many people have actually learned to play that tune. I know I tried, with less-than-stellar success.) I can remember, as if it was just a few years rather than six decades ago, Dave in mid-song, peering out from under his brows to slyly gauge the reactions of his gathered listeners as he executed a particularly interesting guitarlick or unearthed an obscure old blues that he knew none of us had heard before.There was always something both cooly calculating and endearingly naive in his desire to be recognized as a legitimate heir to the growing folk/blues genre.

Dave introduced us to new songs and rearranged ones we already knew intorevelations. The most famous case in point would be his House of the Rising Sun,which engendered innumerable imitations for which he was barely acknowledged.The most famous recordings of this reworked New Orleans lament were made by Bob Dylan, and then by the Animals (who thought it was a Dylan song). Dave’s chord arrangement is virtually the only one that’s played worldwide to this day.

The same could be said for a number of other songs, including the powerful andmuch-recorded He Was a Friend of Mine. That and the fifteen other tracks on this CD are representative of what you would have heard at a live performance in a concert or club at the peak of Dave Van Ronk's career. The repertoire, which features some of his best-known songs, is delivered with the passion, humor and theatricality that typified Dave’s on-stage persona.

The renowned gospel artist, Rev. Gary Davis, was the era’s most revered guitarist and a powerful presence among the revivalists. He is represented here by his Biblical tale, Jesus Met the Woman at the Well, as well as by two of his secular numbers,both of which are ubiquitous must-learn tunes for every aspiring guitar fingerpicker: Candy Man and Cocaine. Dave’s wicked humor shows itself in the lattersong, with his slyly added lyrics: “Went bed last night I was singin’ this song, woke up this morning and my nose was gone... My mucous membrane is just a memory, sometimes I think it’s bad for me (and then I stop thinking.)”

Then there are the straight-ahead blues: St. Louis Jimmy’s classic I Have Had MyFun (also known as Going Down Slow), Josh White’s Jelly Jelly, Brownie McGhee’s magnificent Sportin’ Life Blues and Dave’s iconic take on Come Back Baby, all performed with his stylistic individualism and panache. Spike Driver’s Blues (called This Old Hammer here), is another nod one of our musical heroes, Mississippi John Hurt. Dave and many of us got to hang with John during the brief moment in time when he would grace the stages of the Gaslight and other Village clubs. The inclusion of Tom Paxton’s tribute song, Did You Hear John Hurt, is a fitting touch in this set.

We get a glimpse of Dave’s wit and self-deprecating humor in two originals, Losers and Blood Red Moon, both of which bear witness to a fictional character that in no way resembles the author. “I’m going where that blood red moon don’t shine, I’m goin’ back to Brooklyn where I’m lucky all the time.” (In fact, Dave rarely left the Village and was often heard to quip that he never liked to go north of 14th Street, although he necessarily traveled for gigs. My wife, Jane, remembers that whenDave came to Woodstock for a concert, accompanied by his lovely wife, Andrea, she invited him to spend the night at our house. He decided to go back to New York, saying: “The crickets keep me up at night.”)

Dave’s poignant, touchingly dramatic interpretation of Ian Tyson’s Four Strong Winds wraps up this set and spotlights his uncanny ability to turn a folk standard into a memorable, heartbreaking song of farewell. I can’t think of many singers who could pull this off so well. We hear, in no uncertain terms, how Dave could transform a song, put it through the DVR filter and create a version completely his own. It’s a perfect closer for this terrific performance.

Those of us who had a chance to know Dave Van Ronk were treated to a larger-than-life, contradictory, ultimately lovable personality. He was, among other things,generous, opinionated, sharply intelligent, hypercritical, hospitable, cranky, an unapologetic Trotskyite communist, a sci-fi aficionado, a musical polymath with wide-ranging tastes, a darn good cook and a friend, mentor and teacher to many ayoung, aspiring guitarist. At one point in his career, Dave would surely liked to have become famous, but he lived his life and made his music on his own terms and reluctantly settled for being a “legend.” None of his peers, no matter how commercially successful they might have become, were dubbed “The Mayor of MacDougal Street,” had a Greenwich Village street named after them, or are remembered with such affection. He was unique in the best sense of the word, and his legend will live on.

* When I asked her about that place, Terri Thal, Dave’s girlfriend at the time (later to be his first wife and manager), remembers putting their undecorated Christmas tree (they couldn’t afford the trimmings) out on the loft’s fire escape, and there it stayed. When she took the subway from Queens to Manhattan to meet Dave, 20-year-old Terri could see the tree as the train approached Manhattan and felt the warmth of her impending tryst with her musician lover.