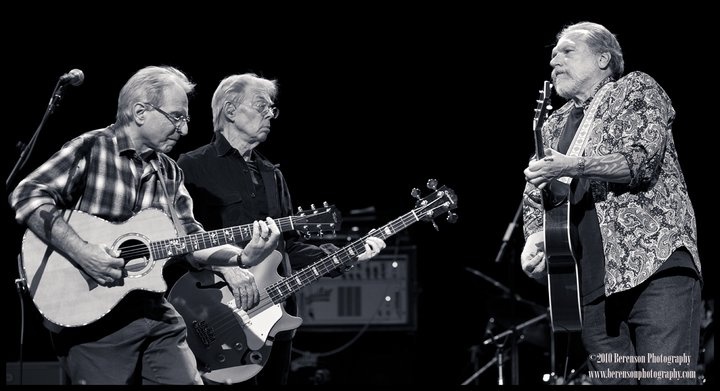 Last month I was honored to be included in the Hot Tuna concert at New York's famed Beacon Theater, celebrating Jorma's big Seven-Oh. It was a star-studded musical evening and great fun to step out onto that glittering stage with Jorma, Jack Casady and a rockin' band. The packed, sell-out crowd was cheering from the first notes of Jorma's guitar, and they gave me, and all the other guests, their enthusiastic approval.

All the players that night put on exceptional performances, with Jack and Jorma front and center (as they should be) throughout the show. Jack, still looking remarkably like the rock 'n' roll kid he was back in the Jefferson Airplane days, stalked and strutted the stage, his powerful bass guitar presence maintaining a pulsing groove that soared on occasion to melodic heights. Jorma was, as always, solid, confident and relaxed, his acoustic and electric guitar mellow when it needed to be and screaming when it had to be.

By coincidence, there were a slew of guest artists playing that night who are on the Homespun roster: Jormaand Jack of course, plus multi-instrumentalist Larry Campbell; blues singer and guitarist John Hammond; and guitarist/singer Chris Smither. Also on the show were Warren Haynes, Bruce Hornsby, Bill Kirchen, Barry Mitterhoff and Byron House. It was an exciting and memorable evening and I was thrilled to have been part of it.

Photographer Barry Berenson shot this image of me playing on stage with Jack and Jorma.