My Recording Session with Peter Tosh (and the Stones) 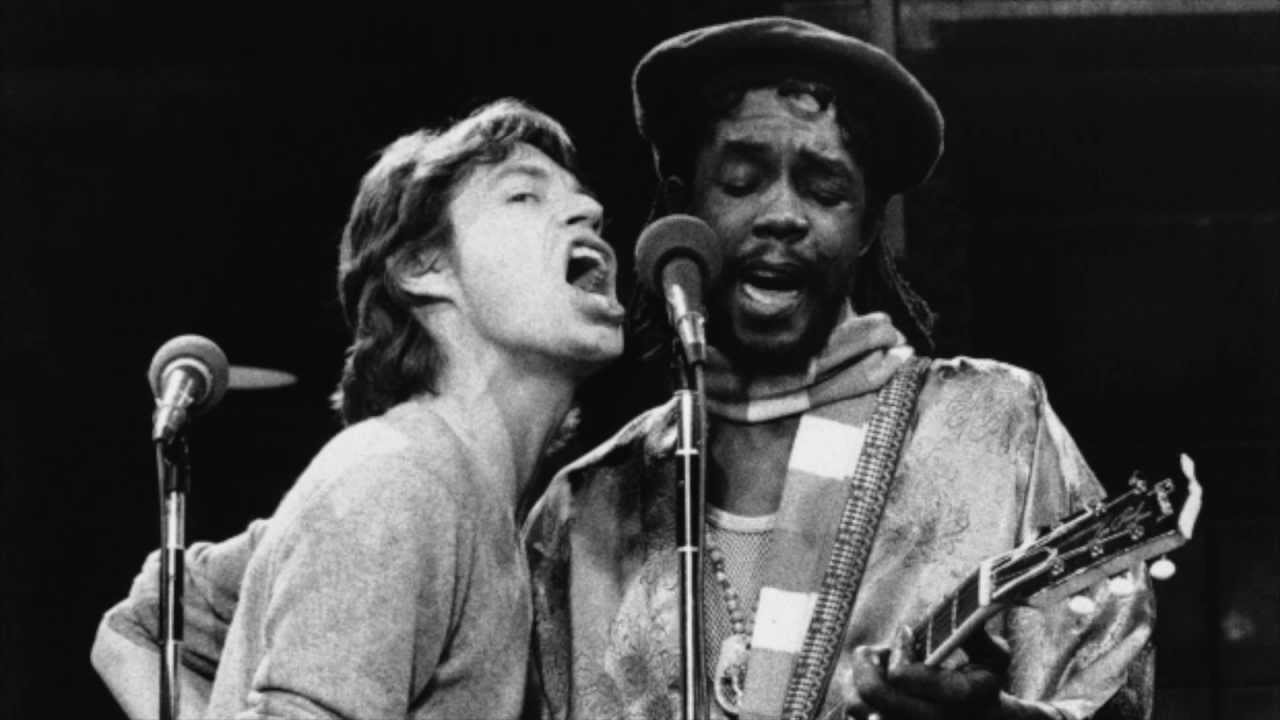 In June of 1978, I was getting ready to go on tour in Europe with my group, the Woodstock Mountains Revue, when I got a call from Griff McKree, the studio manager of the famed Bearsville Sound Studio in Woodstock, a mile or so from my house. Griff said that some musicians would be working there and they were looking for “some kind of a harp” for one of their songs. Could I suggest something?

“Do you mean an Autoharp?”

I had heard some rumors about the Rolling Stones being to town to rehearse for their upcoming “Some Girls” tour, but it was all hush-hush and very top secret. There were unconfirmed celebrity sightings at our local fruit stand and juice bar but, typically for Woodstock residents used to rock and roll celebrities in their midst, no one was talking. Speare Road, the only direct access avenue to the studio, had been blocked off and was being patrolled by security guards, and all traffic in and out was subject to serious scrutiny. So, sensing an “in,” I feigned ignorance and said that yes, I did have one.

“Can we borrow or rent it,” he asked?

“I don’t know,” I replied, “this is a very special instrument and I wouldn’t want it to leave my sight. I couldn’t lend it out unless I came with it. ” In fact, the Autoharp in question was a $15 yard-sale purchase in a battered cardboard case that belonged to my teenage daughter and was gathering dust under her bed. I had never played it (or any other Autoharp) in public before.

Griff then confided to me that Mick Jagger was producing an album with a well-known reggae musician and they were looking for something with a “harp-like sound” to add to a track. “If you came up here with it, do you think you could teach this person to play it?”

Knowing that, with its push-button chords, the Autoharp is one of the easiest instruments in the world to master, I assured him that I could. “Great! I’ll leave your name with security. Come on up.”

After spending an hour or so wrestling with the tuning key to get the many-stringed Autoharp into playable condition, I drove up the long driveway to the studio and gave my name to two bruisers in aviator shades who were manning a barricade blocking the access road. One of them consulted a list, smiled and waved me through.

Bearsville Sound Studio was housed in a large cinderblock structure clad in rough-sawn, dark-stained hemlock and surrounded by thick woods. It contained two state-of-the-art recording rooms plus a rec room (complete with a pool table), sleeping accommodations, eating area and a large vault for tape storage. It was built by Albert Grossman, who had mentored and managed artists such as Bob Dylan, Peter, Paul and Mary, Janis Joplin, the Band, Todd Rundgren, Paul Butterfield, and many other top folk, blues and rock acts of the day. The studio was already legendary, and hit albums had been made there by most of Albert’s clients as well as an “A-list” of other recording artists who were drawn to Woodstock by the scene that developed following the ’69 festival.

I parked in the driveway, walked into the entrance foyer and was immediately hit by the thick smell of pot smoke and the sight of some Rasta guys hanging out and passing around a huge, cigar-shaped spliff. Griff warmly introduced me to the three Jamaicans: Peter Tosh, Robbie Shakespeare and Sly Dunbar. My mouth fell open. I was face-to-face with three of the world’s greatest reggae musicians! Before I could recover, the joint was immediately passed to me - how could I turn it down and not be un-cool?

Already in a slightly dream-like state, I was ushered into a corner of the lobby with Peter Tosh and proceeded to try to teach him the rudiments of Autoharp strumming. He quickly lost interest and said, “No mon, I don’t want to play this. You record it!” But first, another gigantic spliff appeared, and I was reeling.

I was ushered into Studio B, the smaller of the two recording rooms at Bearsville, given a chair and headphones, and Tommy Edmonds, one of the engineers, adjusted two mics over the instrument. In the shadows behind the desk in the control room I could barely make out some people standing around, including the slim figure of Mick Jagger slouching in a corner. Now I was both stoned and nervous!

“Okay, run it so I can get a sense of the song,” I requested, and the basic track for “Creation” played in my headphones as I tried desperately to keep the room from spinning out of control. I began by randomly strumming, trying to find a part to play, trying out different chords on this instrument that I had barely ever played before. By the song’s end I was just beginning to feel like I had some ideas for how I would handle it when a voice came over the intercom: “Thanks man, that’s great.” I sat there stunned. “But,” I stammered, “I haven’t done it yet!” “No, it’s fine. We have what we need.”

Deflated and a little embarrassed, I walked through the control room, past Peter, Sly, Robbie, Mick and others, some smiling, nodding and saying it was great.

I was just recovering my composure when a slightly nervous young woman introduced herself to me as a representative of Rolling Stones Records. She had some forms for me to sign and asked, a little sheepishly, if I would give them permission to use my track. “They’re asking me?” I thought, but immediately gave her my stipulations: I wanted to be paid union scale and I wanted a credit on the back of the album. (Who wouldn’t want his name attached to “Produced by Mick Jagger” on an album cover?) She assured me that this would be no problem and I signed. As it turned out, however, there was a problem. It had to do with work authorization for the Jamaicans. They didn’t have the proper papers so they couldn’t indicate on the album that the songs were recorded in the U.S. So, when it finally came out, my name was seen, in fine print, among a very long list headed “Special Thanks.”

In the final mix, my part was processed with lots of reverb and added to background voices, guitars, percussion and sound effects that evoked “creation”: massive thunder claps, screeching bird calls, rolling surf and, at the end, strident rooster crows. It’s a huge production and, strangely enough, the Autoharp actually sounds pretty good! And, I can tell my friends that I played on a Peter Tosh album produced by Mick Jagger. It’s just a little hard to prove.

The security guys now knew my name and face, and they assumed that I belonged there, so I had full access. I hung out for the rest of the day and was waved through the roadblocks the next day as well to watch the Stones rehearsing in Studio A. There was a lot of down time, with some of the band, road crew, studio staff and a few inevitable hangers-on milling about the halls of Bearsville, drinking coffee and eating sandwiches. Keith was lounging about in full view but I was too shy to engage him in conversation. Since reading his terrific book, “Life,” I realize that we had a lot more in common than I had known at the time, and I actually could have discussed some of the blues artists and other musicians whom we knew in common. Back then, it was just too intimidating.

I don’t know its exact dimensions, but Bearsville’s Studio A was a massive rectangular room with soaring ceilings and stark concrete walls hung with colored fabric baffles. The Stones had a bank of amplifiers lined up near one of the long sides, with mics and instruments on stands towards the center of the room. Behind one of the amps was a tray with a huge mound of coke - supplied, not doubt, by one of the local dealers who crawl out of the woodwork whenever an opportunity arises. I would imagine this was a big payday for somebody, although in Keith’s book he says he was totally clean during this period. I have no idea about the other guys.
The rehearsals started out in a relaxed, low key way, with the band members strolling in, tuning up, wandering about and eventually settling down and starting to casually play some blues. Eventually, Mick or Keith would saunter over to the mic and suddenly they would launch into a song. There, before my eyes (and ears), was a full-fledged version of one of the songs the Stones were working up for their upcoming tour. Only a handful of people were watching, including crew members, and I tried to make myself as small and inconspicuous as possible, thinking I could get thrown out at any point.

The rehearsals went on for a couple of days more, but unfortunately I had to pack for my flight to Europe the next day. I reluctantly left my privileged spot against the wall in Studio A and drove home. I haven’t seen the Stones in person again since then.