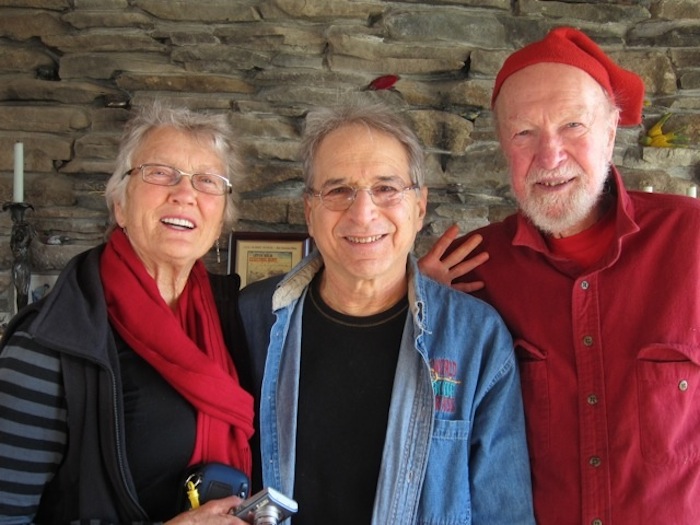 I don't know where I'd be today if it wasn't for Pete Seeger. I’m pretty sure I wouldn't have started singing folk songs or playing the guitar and banjo, and there certainly would not have been a lifetime of writing, performing, traveling, teaching and innumerable musical adventures. I might not have even met Jane, whom I originally encountered through folk music and who has shared my life for more than half a century. I owe it all to Pete.

Back in 1954, some high school friends took me to a concert at the Brooklyn Academy of Music. There, on stage, was this tall, skinny guy, standing alone in the spotlight before hundreds of young people, playing his long-neck banjo and singing for, and more importantly with, the crowd. He sang about all manner of things that I had never heard addressed before, and his energy, enthusiasm and engagement with the audience captivated me, electrified me. I suddenly saw music in a whole new light. It could address social issues and relate to the joys and sorrows, the history and universality, of people everywhere. I watched Pete on stage and I thought, “I can do this too!” As I sang along on "Wimoweh," "Wasn't That a Time," "If I Had A Hammer," and "Irene Goodnight,” I felt the thrill of being part of something vast and important. I thought that music was going to change the world.

The next day, I went out and bought a guitar. I found out about Washington Square, went to "hoots" and folk concerts, learned hundreds of songs and sang them with the image of Pete peering over my shoulder. I tried to approximate his stance, his instrumental style, and his cheer-leader's approach to group singing. I sang only songs I thought Pete would approve of, and wore his records thin -- "Darlin' Cory," "The Goofing Off Suite," "Sodbuster Ballads," and anything I could get my hands on by the Weavers. I sang of solidarity with unions, even though I wasn't a worker; peasant chants - and I certainly wasn't a peasant (never even met one). I sang songs in bad Korean, unintelligible Swahili, broken Hebrew, and other languages that Pete sang in. I was one with the miners, the farm hands, the pioneers, the whalers (still politically correct in those days), the “people.”

From the perspective of 1995, this all seems naive and hopelessly out-dated, but somewhere deep inside my soul the eternal optimism of Pete's songs still rings true. I think of those old days as sunny and warm, filled with camaraderie, friendship and idealism, with Pete's warm voice, gentle humor and thrilling banjo leading our way to a better world. And even if that new world doesn't materialize in our lifetime, I know that one sixteen-year-old's life was irrevocably changed by the revelation of a lone man on a wide stage, singing his songs and becoming one with his audience. Thanks Pete. I'll be forever grateful.