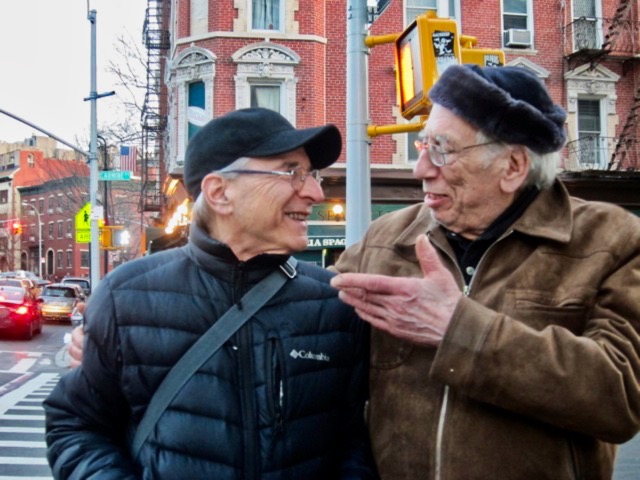 In 1957, I was 19 and already a committed folkie and a frequent participant in the Washington Square jam sessions on fair-weather Sundays. I had heard of a place that was opening on MacDougal Street, just a few blocks away, so I went over there one May afternoon for the Grand Opening. I found myself in a group of fellow folk singers having a jam of our own in the back room of the little shop. Jean Ritchie was there with her dulcimer, as were Carolyn Hester, Roy Berkeley, Cynthia Gooding, Mollie Scott and several others. Jean’s husband, photographer George Pickow, captured thisnow-iconic photo at that event.

That’s where I met Izzy, ten years older than me and much more worldly. I became one of the regular young folkies who used the store as our home base, clubhouse, gossip mill and resource for books, magazines, strings, picks, capos and other paraphernalia of our folksinger’s trade. Izzy became a kind of big brother (some say father figure) who presided over his little domain like an autocrat of a small country. He could be opinionated, irritable, kind, generous, judgmental, funny, irreverent, unabashedly radical and good-natured - all in one short time period. We loved him. Because of his generosity and general distractedness he was not a good business man, which was one of the things we liked best about him. If he didn’t like the look of someone who came into the Folklore Center, or if the person came in with a lit cigarette, or asked a foolish question, he’d be more than likely to throw him or her out. He didn’t suffer fools - or those he thought were foolish - lightly.

Izzy kept voluminous journals in his small, cramped handwriting, which kept track of all the goings on of our little community: Which musician is recording for which label; where he or she is touring; who’s getting married or having children; who has “sold out” and went commercial; whether or not he liked a given recording, performance or personality. Minutia in the minuscule world of folk music in New York City at that period of time. An edited version of these notes can be found in book called “Conscience of the Folk Revival: The Writings of Izzy Young.”

Early on, Izzy branched out from shopkeeper to concert promoter, first in his store and then in venues throughout the Village and beyond. He famously put on Bob Dylan’s first concert, at Carnegie Chapter Hall, in 1961, but before that he was hosting shows at small theaters in the Village, usually at midnight after the theatrical productions were over. I saw the New Lost City Ramblers, the Clancy Brothers and Odetta, among others, in Izzy’s very small store; Paul Clayton, Bonnie Dobson (I think), Brownie and Sonny, Ian and Sylvia, Logan English and many others in slightly larger venues. Izzy promoted a couple of my first concerts, with Dick Weissman, as early as 1959, at the Provincetown Playhouse.

When Ralph Rinzler came to New York with a collection of Southern traditional corn husk dolls, Izzy hired my wife, Jane, to set up the show, arrange the dolls and look after the whole exhibition. He always loved Jane and they remained friends through the years.

In April of 1961, when the city decided to ban our weekly singalongs in the park, Izzy organized a protest that became “The Great Folksingers’ Riot.” He led, in his decidedly unmusical voice, renditions of “The Star Spangled Banner,” "America the Beautiful,” “This Land is Your Land,” and other patriotic songs. The police were not amused and several participants were pushed around and arrested. Izzy continued to fight for the cause until the city relented and folk singing was restored in our beloved Washington Square Park.

In 1960, Izzy and a friend convinced Mike Porco, who had a workingman’s bar and restaurant called Gerde’s, just east of Washington Square, to put in a stage and some sound equipment. They’d bring folk fans in, charge a small admission fee, and Mike, who knew absolutely nothing about folk music, could keep all the bar and hamburger receipts. Due to Izzy’s lack of guile and business acumen, he lost control of the venue within a few months and it was turned over to more canny operators. As Gerde’s Folk City (later just Folk City), it became the most prestigious and successful folk club in New York, alongside the Bitter End, the Gaslight, Cafe Wha? and other such stages.

By the late Sixties, Izzy had joined forces with luthier and musician Marc Silber and opened a new store, Fretted Instruments, a few blocks away on Sixth Avenue. Again, they produced concerts - I remember hearing a young Jerry Jeff Walker accompanied by David Bromberg - sold musical paraphernalia, and added expert instrument repair to their offerings. Musicians came from far and wide to have their guitars, banjos, mandolins, etc. set up and made playable.

By the early Seventies, Izzy was gone. He left for Sweden under mysterious circumstances, but quickly established his Folklore Centrum in Stockholm, where it barely survived for nearly fifty years. Izzy remained the same - generous to young musicians but still irascible, opinionated and always a “mensch.” He was greatly loved and his loss is deeply felt by everyone whose lives he touched.