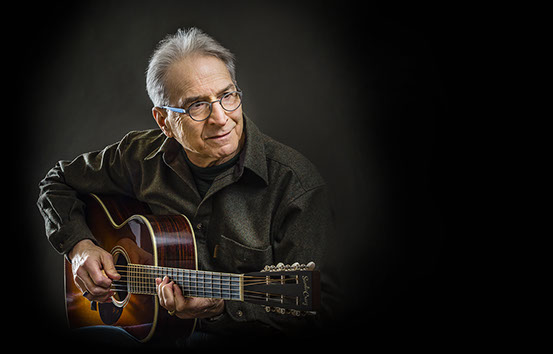 The Story of a Guitar

I started playing the guitar when I was 16. With my parent’s help, I bought a Harmony Sovereign with an action so high you could slice cheese on the fingerboard. My fingers got pretty sliced up, too. It never occurred to me back then that I could have taken it to a repair shop to get it adjusted. (Actually, I’m not sure there was such a thing in the Bronx in 1954.) So, I struggled with it for a couple of years, learning my basic chords and some folk songs, and building some pretty impressive callouses.

When I discovered there were better instruments in the world, I saved up some money and went on a hunt for one that was within my meager budget. At that time, in addition to a number of established music stores in mid-town, friends told me about a couple of large shops way downtown on Park Row, on the Lower East Side, that sold used instruments of all kinds. So, one Saturday afternoon, my friend Barry Kornfeld and I ventured from the Bronx into that unknown territory of lower Manhattan and found, in Silver and Horland, a cornucopia of used guitars, banjos and other instruments hanging on every wall. I quickly found the one I wanted: a great-sounding 1946 Martin D-18 for, as I remember, $125 (with case). I had my first really “good” guitar.

The problems started a little later. Although it had a big, booming sound, I noticed that the top was bellying out and the bridge started lifting off. It was also increasingly hard to keep in tune. It turned out that the great sound, and the problems, were caused by the previous owner, who had amateurishly shaved the braces and (somehow) sanded the top so it was paper thin. To keep the bridge from pulling off entirely, I went to a repair shop (no memory of which one it was) and had a tailpiece installed so the strings went across, rather than into, the bridge, taking the pressure off the top. It worked great for a few more years.

Now, I should say here that I’ve never been technically adept with the basic physics of guitar building and repair. I have many close friends who are amazing luthiers, set-up and repair experts, but that’s just not in my DNA. So, I never really looked closely into the innards of my used Martin. As long as it worked, I was okay with it. It looked fine on the outside, but was sick inside. Nevertheless, I loved and cherished the guitar for several years.

I sold the Martin sometime in the early Sixties and moved on. I didn’t think about it much but the memory of it popped into my mind from time to time. I had totally forgotten to whom I had sold it, and it eventually faded from my life.

Then, about 20 years ago, I was at the 70th birthday party of Lee Haring, an old friend whom I had known from the Sunday jam sessions at Washington Square in the 1950s. We had remained friends through the years, especially after he moved to Saugerties, not far from Woodstock. Our mutual friend, the banjo virtuoso Billy Faier, was playing some tunes and he asked me to play with him. I hadn’t brought my guitar that day, but Lee pulled out an old case and I took out the instrument and started to play along with Billy. “Wow,” I said, “this is a great-sounding guitar!” “Glad you like it,” said Lee. “You sold it to me about fifty years ago.” No tailpiece, but I looked closely and, sure enough, there were three tiny holes where it would have been attached. “Well,” said I, “if you ever decide to sell it let me know. I’d love to have it back.” The following Christmas there was a knock at my door, and there was Lee with guitar in hand. “Merry Christmas,” says he, and hands me my old Martin. I was speechless.

After playing the guitar for a while, though, all the old problems were still evident. It sounded beautiful but wouldn’t stay in tune. The top was bellied out and the bridge, once again, looked kind of iffy. So, it sat in its case for another ten years or so while I thought about what to do about it.

Finally, the old Martin started telling me I had to fix it or chuck it. So, I brought it to Lyn Hardy, an excellent luthier here in Woodstock, who agreed with me that the only thing we could do was replace the top. I left it in her capable hands and after a while got some photos of what she found when she opened it up. After more than sixty years, I discovered what had made this poor guitar so sick - it had been in the hands of a veritable wood butcher! The level of destruction under the top of this instrument was criminal. Since the guitar was only about ten years old when I bought it, I can only assume it was stupidly and inexpertly “worked on” - destroyed might be a better word - by the original owner. If you have the stomach for it, take a look at the pictures of the underside of the top.

Then, for a more uplifting image, you’ll see Lyn’s careful restoration and the current state of this venerable old Dreadnought. It still sounds great and now frets as it should, in tune. So, although I don't play it as often as I do some of my other instruments, my old D-18 sits among my small but treasured guitar collection, and I’m glad to finally have it back.